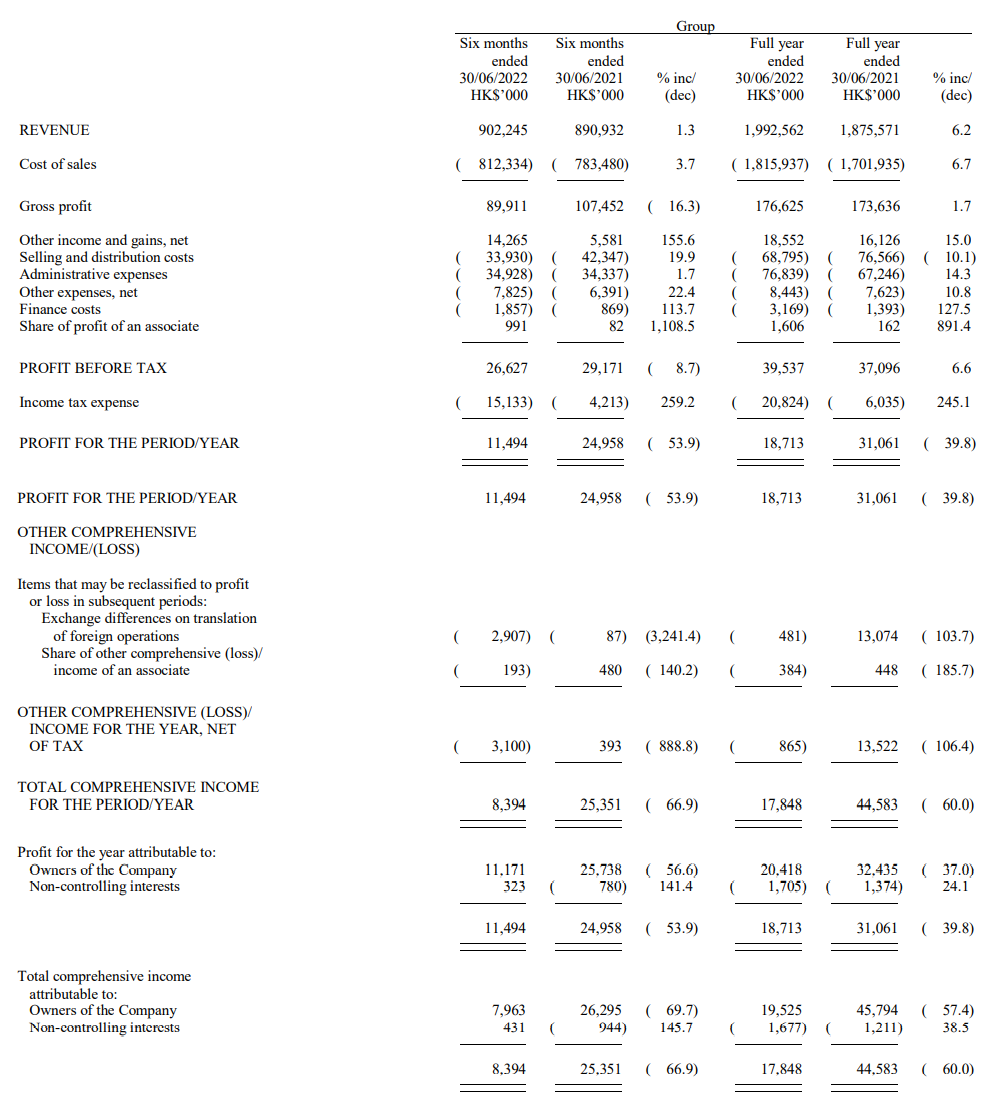 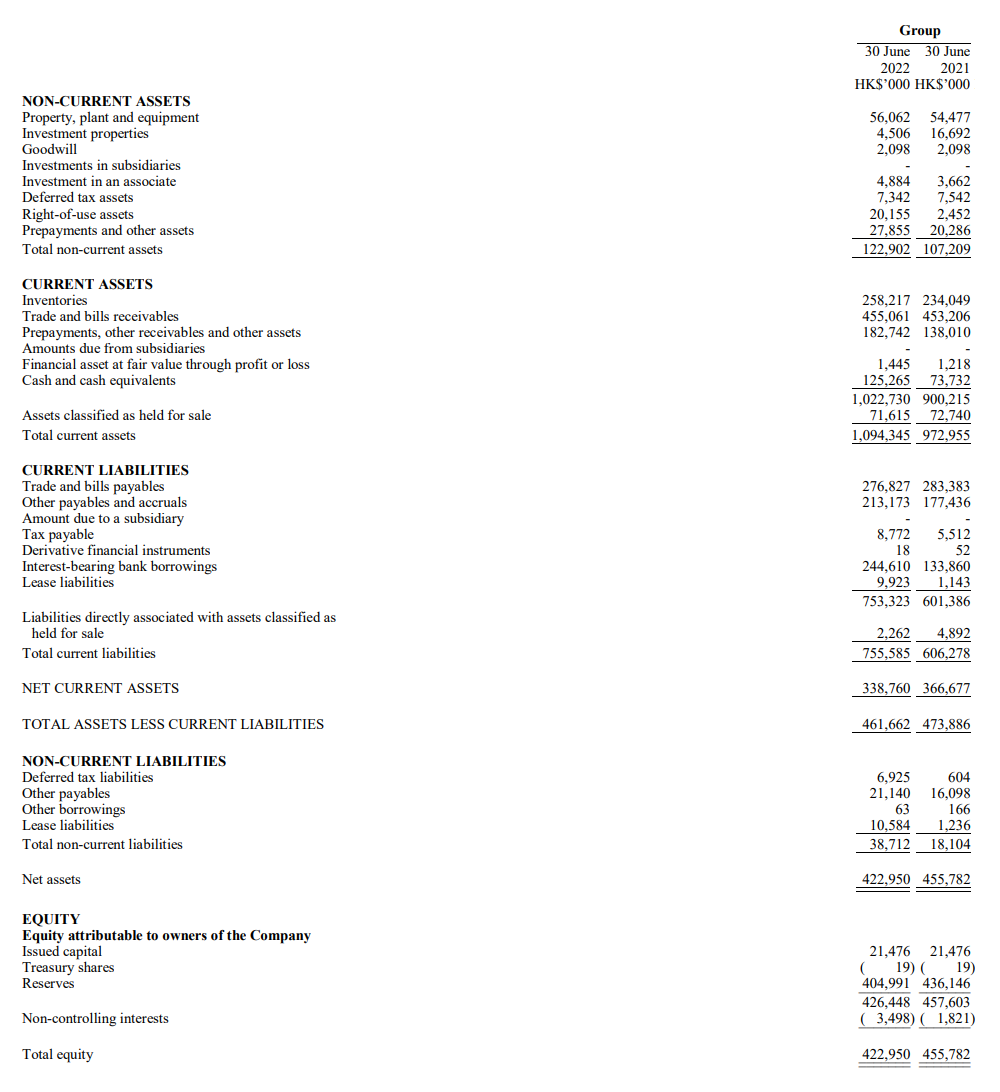 Revenue from our Components Distribution (“CD”) segment decreased by HK$81.9 million or 12.5% to HK$572.7 million for the year under review from HK$654.6 million for the year ended 30 June 2021. The decrease was mainly due to the protracted lockdowns for prolonged periods in various major cities in the PRC as a result of China’s zero-COVID strategy which ceased most of the business activities especially in the second half of FY2022.

Revenue from our Information Technology Infrastructure (“IT Infrastructure”) segment increased by HK$97.9 million or 9.2% to HK$1,163.7 million for the current year from HK$1,065.8 million for the year ended 30 June 2021. The increase was mainly due to strong demand for network security products, cloud solution services and data visualization tools as a result of accredited work done in past years that this segment was able to go wider and deeper in the market during FY2022.

Revenue from our Consumer Electronics Products (“CEP”) segment increased by HK$100.9 million or 65.0% to HK$256.1 million for the current year from HK$155.2 million for the year ended 30 June 2021. The increase was mostly due to the release of certain new CEP coincided with the consumption voucher scheme launched by the HKSAR Government.

Other income and gains, net

Other income and gains, net increased by HK$2.5 million or 15.5% to HK$18.6 million for the year ended 30 June 2022 from HK$16.1 million for the year ended 30 June 2021. The increase was mainly due to (1) HK$10.5 million gain on disposal of properties held for own use and investment in the PRC; offset by (2) decrease in COVID-19 pandemic subsidy received; and (3) no fair value gain on investment properties recorded for the year.

Substantial increase in income tax expenses was mainly due to (1) withholding tax of HK$5.6 million paid on dividend declared by subsidiaries in the PRC and repatriated to Hong Kong during the year under review; and (2) accrual of withholding tax liabilities of HK$6.1 million on retained profits recorded in those subsidiaries in the PRC that have yet to be declared as dividends for repatriation to Hong Kong.

Net profit attributable to owners of the Company decreased by HK$12.0 million or 37.0% to HK$20.4 million for the year ended 30 June 2022 from HK$32.4 million for the year ended 30 June 2021. The decrease was mostly attributable to (1) increase in tax expenses of HK$14.8 million which includes the withholding taxes as explained above; (2) increase in depreciation of right-of-use asset of HK$6.8 million; (3) increase in finance costs of HK$1.8 million; and (4) offset by gain on disposal of properties in the PRC of HK$10.5 million.

At 30 June 2022, non-current assets amounted to HK$122.9 million, representing approximately 10.1% of the total assets. Non-current assets increased by HK$15.7 million or 14.6% to HK$122.9 million as at 30 June 2022 from HK$107.2 million as at 30 June 2021. The increase was mostly due to (1) increase in right-of-use assets of HK$17.7 million which was due to the Company moving to a leased office premises during the year; (2) increase in long term prepayments and other receivables of HK$4.5 million; and (3) increase in contract assets of HK$3.0 million which was a result of the increase in the ongoing sale of IT infrastructure towards the end of the financial year; and offset by (4) decrease in investment properties of HK$12.2 million due to the disposal of properties in the PRC.

As at 30 June 2022, current liabilities amounted to approximately HK$753.3 million, an increase of HK$151.9 million compared to the preceding financial year end as at 30 June 2021. The increase was mainly due to (1) increase in interest-bearing bank and other borrowings by HK$110.7 million; and (2) increase in other payables and accruals by HK$35.8 million.

The Group expects the industry to be impacted by external factors such as geopolitical tensions, which have led to global economic uncertainties, ongoing supply chain disruptions, and rising inflation. This may potentially lead to slower demand for electronic components and weigh down on consumer spending. In this connection, the Group has also observed a build-up of inventory within the industry, which may slow down orders in the near term.

On the other hand, the Group expects its IT Infrastructure segment to benefit from government and commercial projects as well as increase in business spending on IT upgrades. This is expected to offset some near-term weakness in the CD segment. Meanwhile, our CEP segment is expected to launch new consumer electronics products in the coming months in view of the Hong Kong Government’s ongoing consumer voucher scheme. The rising costs in logistics and manpower resources as well as interest rate hikes may continue to impact our profit margins in the near term.

We use cookies to improve your experience on our site. Find out more